The International Energy Agency’s September report has highlighted the low level of oil discoveries, their lowest since 1952. Wells are depleting at an average rate of 9% per year, and drillers aren’t finding enough new sources to replace that loss, the result of which will be a spike in oil prices.

“There is evidence that cuts in exploration activities have already resulted in a decline in new oil discoveries, dropping to levels not seen in the last 60 years”, said the IEA’s World Energy Investment 2016 report. 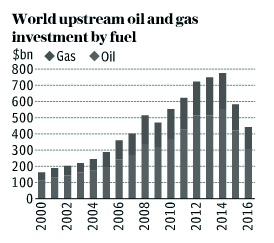 Over the last two years, annual investment in gas and oil projects has fallen from $780bn to $450bn. Spending in politically stable areas has seen the majority of the drop, with North Sea investment falling from c. £8bn to £1bn and spending in Canadian fields dropping by 62%.

“With the price of oil at current levels, one would expect supply to contract and demand to grow strongly. However, the opposite now seems to be happening”, the IEA said.

Despite the downward trend, new resources are being tapped.